RMVO will use its extensive connections within the progressive community to recruit and hire motivated canvassers who care about the issues we work on, and understand the important role of grassroots outreach in the political process and the success of any political campaign.

All of our circulators will be hired with the intention of keeping them on staff beyond the deadline for turning in petition signatures so that they can be part of our electoral field team during election season. This means our staff will be trained, and be available as required by law if our signatures were ever challenged.

The leadership of our petition gathering teams bring years of experience gathering petitions and canvassing for a variety of different progressive organizations and environmental groups. We also hold our signature gatherers to high standards in terms of appearance, attitude and the way they represent the campaign out in the field. At RMVO, we feel it is important to change the way that petition gathering is perceived and bring integrity back to this most basic of democratic practices. 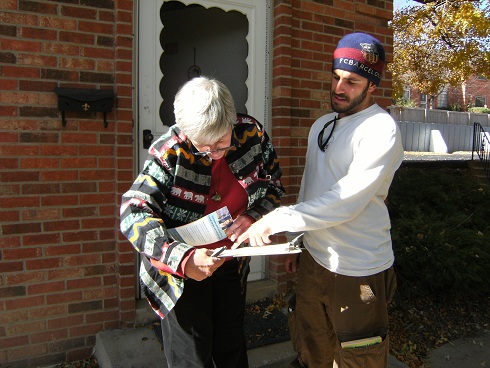 By keeping track of every single signature collected by our staff, and every hour that they work, we have been able to develop the best strategies to enable us to finish collecting your signatures ahead of planned timelines. This extra time allows for more verification and preparation for turning in the signatures making a challenge to validity improbable, and an inadequate use of opponent resources.

There are several different ways to reach out to Colorado voters to gather petition signatures, and because each and every issue or potential ballot question is so unique we know that we cannot take a one size fits all approach to petition gathering. No matter what your issue is, RMVO will sit down with the proponents and work through the following basic tactics in order to figure out what will work best for your campaign.

Canvassers speak with voters and ask people to sign the petition in high traffic pedestrian areas such as malls, grocery stores, college campuses and community events. This tactic is best suited for statewide issues that are relatively popular with most people, or have high concentrations of supporters in certain locations. While gathering signatures is obviously the number one goal on petition projects, having RMVO canvassers out on crowded street corners and in front of popular shopping locations gives great visibility to every campaign.

Canvassers go door-to-door using a voter file or targeted voter list to approach registered voters at their homes and gather petition signatures. This tactic has traditionally been used when collecting petition signatures to place a candidate on the ballot due to the fact that the signer must live in a certain district and be registered with a certain political party.

Even though this tactic requires more time and resources than street canvassing, there are still several reasons why collecting petition signatures at the door can be an extremely valuable tactic for many campaigns. The pros of collecting signatures through door canvassing include:

1. The ability to knock on doors of a targeted universe of voters who are likely to support your initiative.

2. The ease of having a longer and more complicated conversation at the door to help with issue/candidate messaging resonance.

3. Much higher signature validity rate and the ability to identify supporters and volunteers in certain areas.

We have been very successful working with organizations to gather signatures through volunteers, group meetings and other avenues. There is a good amount of time and energy used in forming a coalition and organizing it, but this can lead to large gatherings and access to events where signature gathering may otherwise not be allowed.

If we work to build a coalition during the signature gathering phase of your campaign, then you already have the infrastructure needed to push for a victory once your question has been qualified for the ballot.

Determining whether or not the issue/campaign will be easy to understand, or if the issue is complex and voters will have difficulty comprehending it will be the biggest factor in determining how to proceed. A statewide issue with more potential signers and more locations to gather signatures would lead to a more traditional ‘street canvassing’ type of signature gathering campaign. Issues and candidacies where signers must live within a certain district or municipality and where there are fewer locations to street canvass will lead to a ‘door canvassing’ to gather signatures. Many petition drives will be best served by implementing a plan that combines all three signature gathering tactics focusing on the tactics that will be the most time and cost efficient depending on the nature of the specific issue.